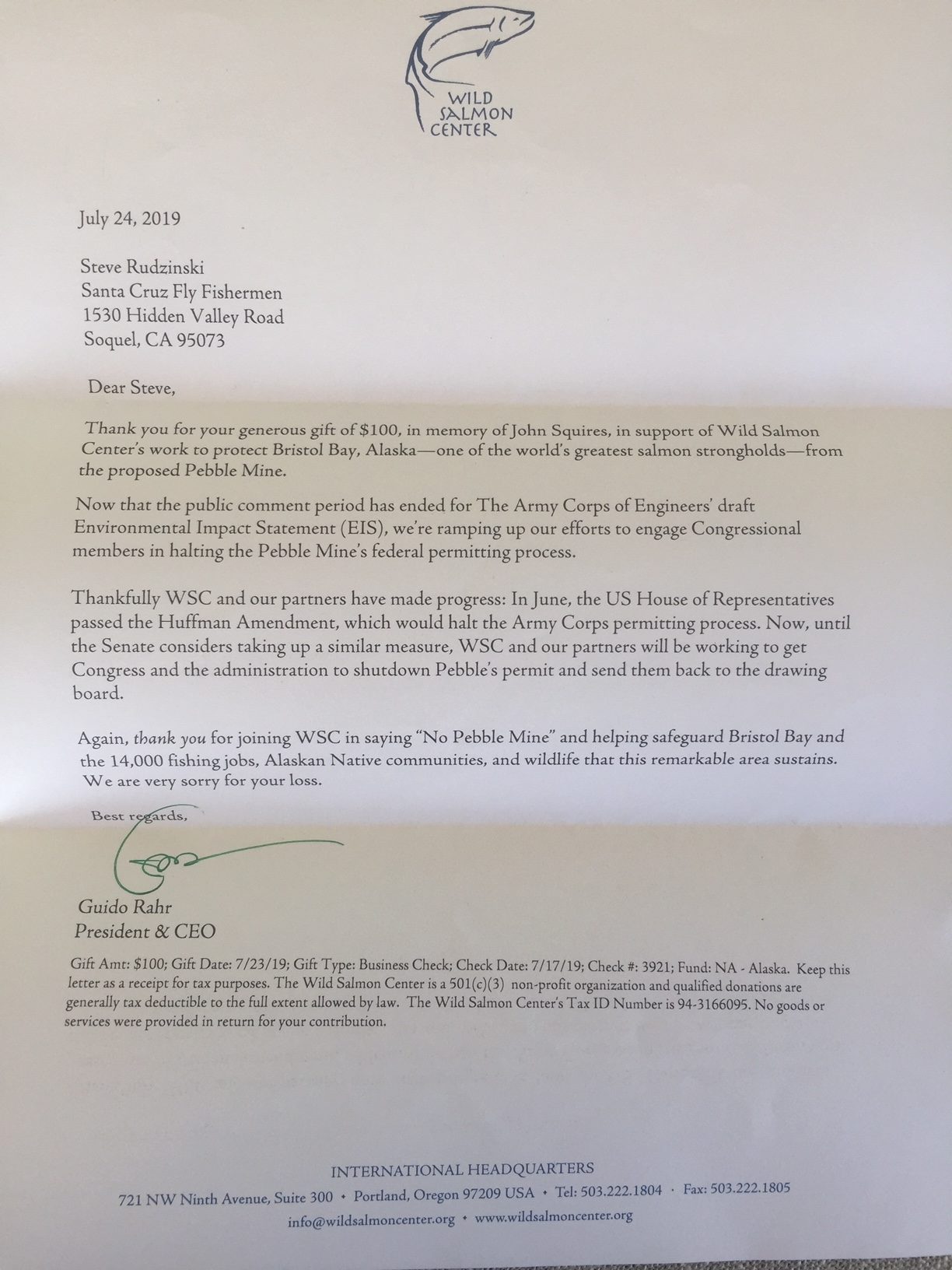 I attached a letter from the Wild Salmon Center thanking me (Santa Cruz Fly Fishermen members) for our donation to help save the fishery at Bristol Bay AK and to stop the Pebble Mine plan to create the worlds largest open pit copper and gold mine, destroying the last source of the only truly wild river producing  2/3 of the world wild salmon to market.

We had scheduled John Squires to speak again at the club in October 2018 and while guiding clients on the American Creek in Alaska in August, his pontoon boat struck a fallen tree and all were in the water, the clients lived a harrowing day and night on the opposite banks before getting help but John was never found.  We donated his speaking stipend to the TU Alaska fund to saving Bristol Bay as he told me to do prior to booking him for our meeting.

Two nights ago on June 25th, while float tubing and fishing the famous ‘Hex Hatch’ at lake Almanor with an armada of other fly fishermen, there were 2 guys in a boat, the only boat in our area and I was chatting a little with them every time I kicked by. The last time the older of the two asked me if I knew the Santa Cruz fly fishermen and Steve Rudzinski?  I never saw them before and said that I was he and had no idea that it was about.  Apparently their mother was the widow of John Squires and she said they should try to find me and thank me for honoring their father.

Now sometimes things happen in very mysterious ways as they had no idea what week we would be there and I almost fished another spot and changed my mind at the last minute, almost like being directed by an unknown source. Dan and Joe offered me a beer which I accepted and we toasted their father who must have been present in some way as we told a few stories out there bobbing in the waves.

As far as conservation issues, I am finding that most agencies and programs and even the courts are on hold from making any decisions while the Covis-19 shutdown is still in force. I did not see many masks in northern CA and in Chester and the surrounding area, only 2 cases reported up in the county according to the management at North Shore Camping where I camped for five nights with 2 other club members. The fishermen I met all thought this was a poor week to fish for the majority and me included by landing only one very nice brown trout and a few big bass. The Mayfly hatch was much less than in previous years I recall and the surface temp was 73/74 degrees all week and getting warmer. We did not see much surface action although the bats showed up after dark, the ospreys got a few fish and the western grebes were mating and in large flocks following schools of pond smelt. One lone loon calling in the darkness it’s lonely shrill sound.

Till next month, be safe and be kind to each other, it’s tough for us all living in fear and uncertainty or at least confusion as to ‘what’s next’?