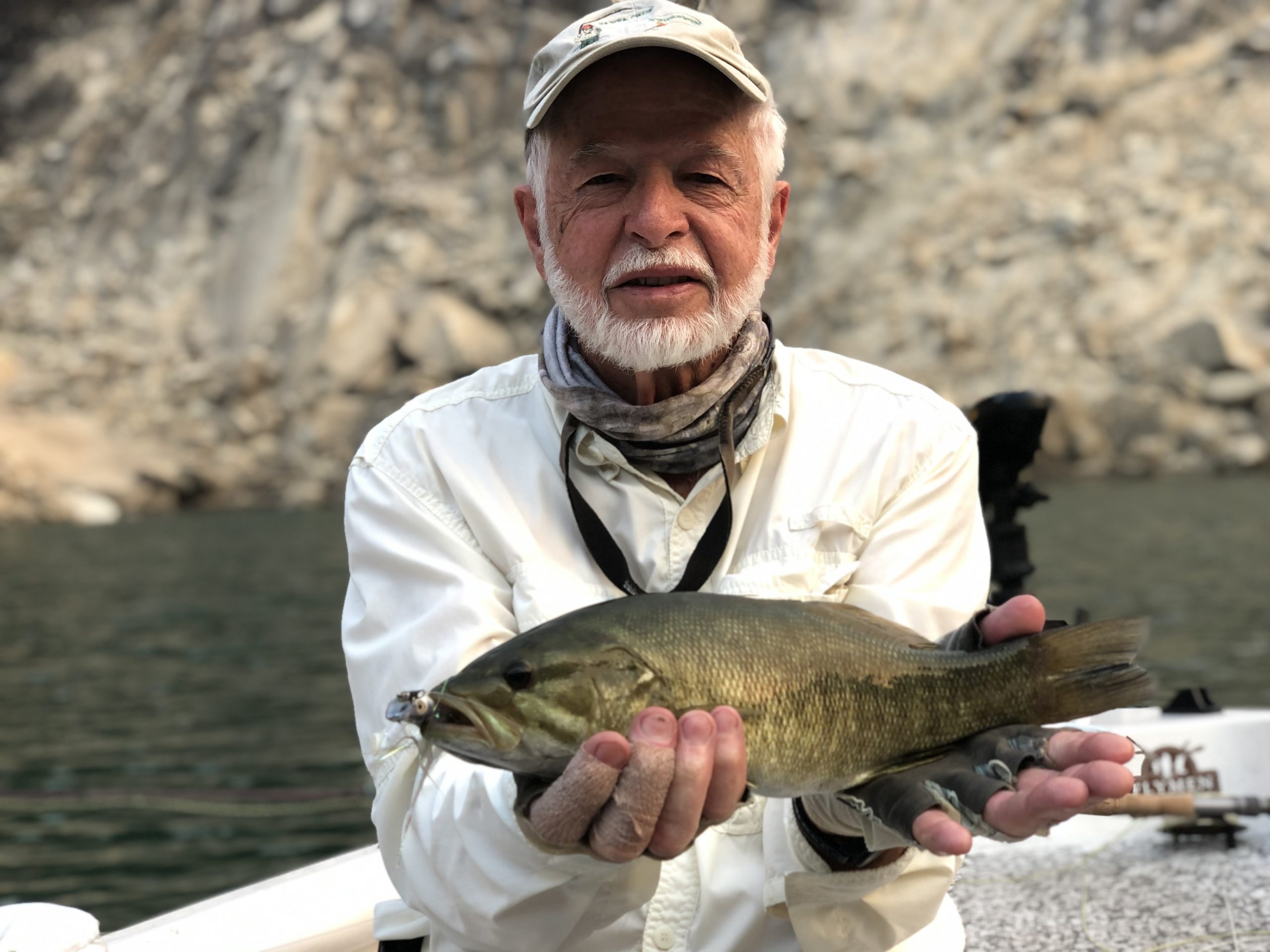 Remember the great presentation last meeting on fishing top-water for Bass on Lake Oroville? Well I was fascinated, so I picked up Jerry Greer, my long time business partner and avid spin fisherman in Modesto, then we flew through horrible smoke to Oroville. Oroville was much more clear than the area from about  Sacramento south, at least that day and the next.

We flew up on a Wednesday afternoon, arriving at 4 pm. Ryan picked us up with his bass boat in tow and we went straight to the lake where we fished until dead dark. I caught at least a dozen spotted bass and one smallmouth bass. Well I am not real educated on the type and identification of bass, but Ryan said that smallmouth was the largest that has been landed on his boat. So the picture of that smallmouth is attached. Didn’t look all that big to me though.

So here is another interesting revelation. Ryan, if you remember, talked about “float flies”. I didn’t know what that meant (and I doubt anyone else on the Zoom meeting did either) until we were on the water and I said let’s do that too. Lo and behold it was just an indicator/bobber, with a # 4 or #6 weighted jig hook! I had to laugh, remembering that I was in our club a year or so, afraid to show my ignorance by asking what they were talking about when they talked about an “indicator”. Heck, it just a bobber. So was this, but shaped different!

Well I am making fun of it, but it was very effective. In fact the next morning at 5 am we met Ryan at our motel and launched the boat as twilight was barely breaking. I fished the top-water poppers for over an hour with no luck, then went to the “float fly”. It worked quite well and I got at least another ten fish until we stopped at 11 am and headed back to the launch ramp, then the airport.

BTW, the flies out caught the spinner lures big time both days. Ryan even mentioned that was unusual. I was surprised too, because Jerry had great  top-water gear lures. I still would not bet serious money on catching bass on a fly rod over lures on a spinning rod.

The flight back was not particularly pleasant, with smoke extending up thousands of feet. Due to the terrible visibility, I had to make instrument approaches to Modesto to drop of Jerry, then another coming in to Watsonville. I was back to home base 24 hours after leaving with a wonderful fishing adventure stored permanently in my memory.

Thanks Jim Black for arranging that presentation. I would never have known about fishing that lake without it.

1 thought on “Oroville with Ryan Mathew”